Engineered mineral fibres from Lapinus are used globally in friction applications. They give the friction material a combination of mechanical and tribological properties, in both NAO/non-steel and low steel formulations. Mineral fibres have a pronounced effect on the micrometric scale at the surface of the brake material. They can act as an anchoring point, which effectively promotes the third body layer formation and development. As a result, friction stability and wear resistance are improved. They also influence friction level due to their chemical composition and their contact and interaction with the counterpart, the metallic disc.

With regard to health and safety aspects, these mineral fibres have the important property that they are certified as biosoluble, which is determined by the specific chemistry. The chemical tolerance range of bio-solubility can be effectively controlled during the production process. Thanks to this, it is possible to offer two different bio-soluble fibre grades to the friction industry.

The fibre chemistry is one of the key characteristics for the unicity of these mineral fibres. The chemical composition has a significant effect on the production process and therefore on the specific physical properties of the mineral fibres. This directly influences friction performance and pad and disc wear.

This paper describes the effect of fibre properties, such as chemical composition and fibre diameter, on friction performance in disc pad applications. The paper shows test results of a new mineral fibre grade, which has been specially developed to offer an alternative performance to current products with the aim of reducing disc wear. This new product consists of a different chemical composition without compromising the bio-solubility of the fibres. It is shown that overall friction and wear performance are influenced, which opens up new possibilities for friction material formulations.

The study shows the friction performance of NAO copper-free materials with the focus on the specific role of the chemical composition of two different mineral fibres at the surface layer of brake pads. With the development of a new fibre grade, it is possible to promote third body layer formation and stabilisation of the friction level, without this having an aggressive effect on the disc surface. With this development it is foreseen that this newly engineered fibre can complement future formulations in reducing wear, and therefore also dust emissions (e.g. wheel dust). 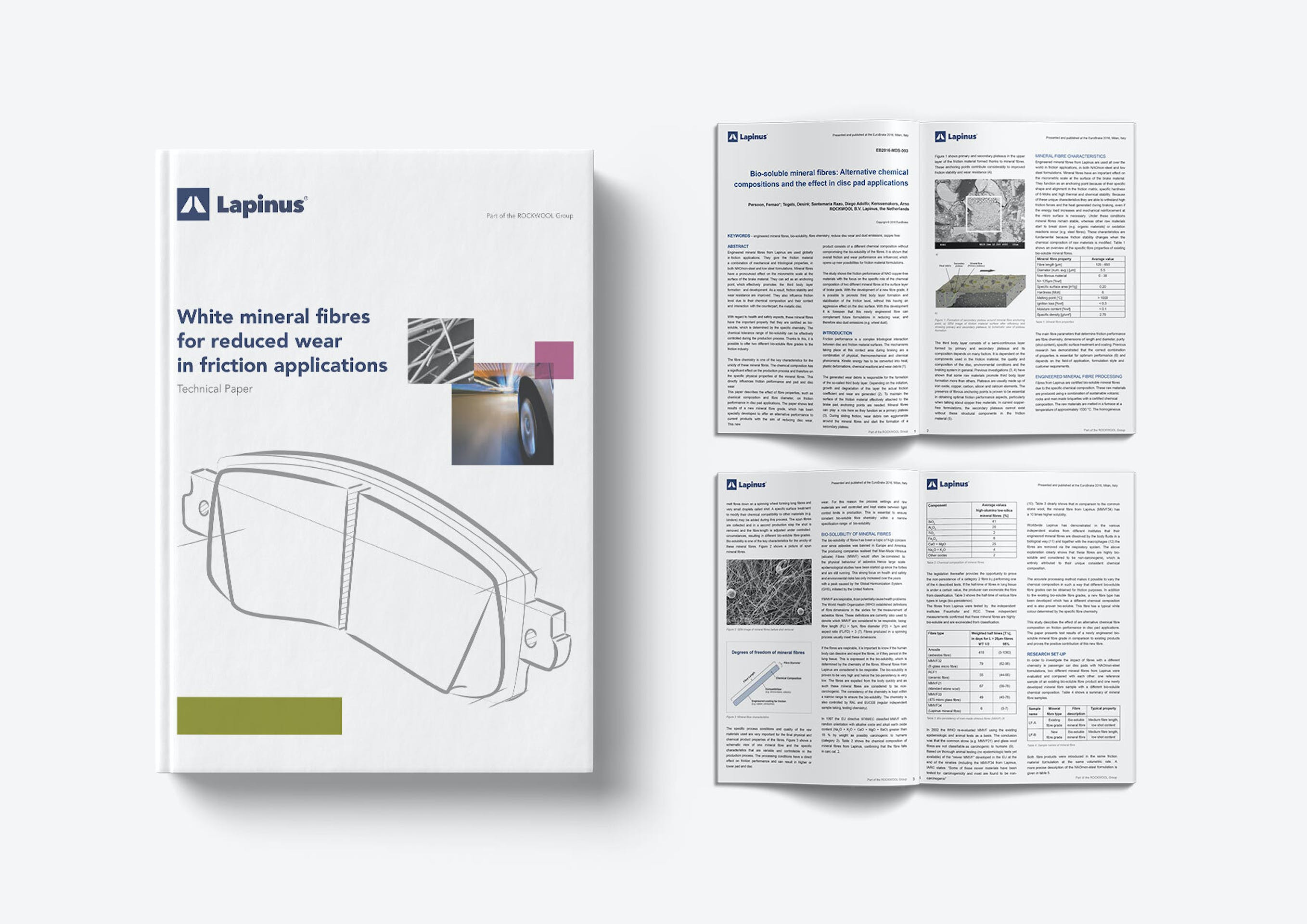 Friction performance is a complex tribological interaction between disc and friction material surfaces. The mechanisms taking place at this contact area during braking are a combination of physical, thermomechanical and chemical phenomena. Kinetic energy has to be converted into heat, plastic deformations, chemical reactions and wear debris.

How can we help you?